Proof of Concept: Success from the DTR Podcast 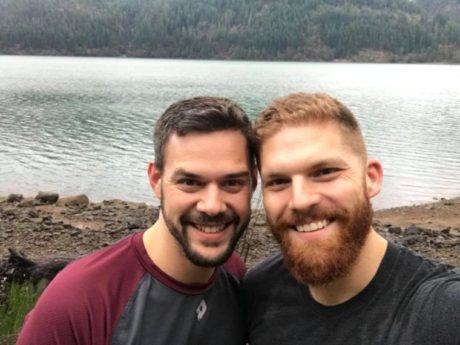 Late last year we stumbled upon DTR, Tinder’s official podcast. In its second season (which we binged in one sitting), the premise is simple—what happens when you let others swipe for you? After we finished excitedly shouting “Yes! Exactly! It’s Meddle! IT’S. MEDDLE.” we found ourselves particularly drawn to the last episode, “That’s What He Said.”

It features Scott, whom some of you might know as the winner of 29th season of The Amazing Race. Given that he now calls Seattle home, we caught up with him last month and the date he matched with, Justin, to see what they thought about how the whole letting someone else swipe for you actually played out.

Meddle: So, by nature of you both being here, can we take that as a good sign that the date went well?

Scott: Yes! The timing of things is a little strange, since the podcast came out at the end of the year, but our first date was actually in mid-October. So we’ve been together about 4 months now. And we’re still just keeping it low-key, but he is my boyfriend, if you want to make it official.

Justin: Speaking of official, I think we were both hesitant to put a label on it, but for different reasons.

M: What were your reasons, if you don’t mind us asking?

Justin: For me, I’ve had a few long-term relationships and so I just wanted to be sure before putting that label on it.

Scott: And for me, I was sort of the opposite in that I had never really defined a relationship in that way before, and so I wanted to be sure.

M: Well, congratulations! We guess you two are living proof that letting someone meddle in your dating life can have a really positive outcome…seriously, this is like proof of concept for us and the Meddle app.

Scott: You know, maybe I’m missing something, but I really love the idea that someone else does the selecting part of dating for you. It’s a fresh, new perspective, you’ll get great feedback…I mean why not? Now I had been single my whole life, so I really didn’t have anything to lose…

M: So then what was was the main incentive for you {Scott} participating in this podcast/dating experiment, aside from the obvious potential for a positive outcome? What was the whole process like for you?

Scott: For me, it’s cathartic to be in the public eye. I have to just put it out there. I totally loved it when I won the amazing race, and sort of saw it as a chance for me to be this ambassador of sorts. In these types of very public situations, your senses are so heightened, it makes you really thoughtful and insightful and self aware. And it makes you more receptive to doing something you normally wouldn’t do. So doing DTR seemed like kind of an easy choice.

And being a part of DTR was great. The hosts gave me some really good advice.

Scott: Well, from some small profile-type stuff, like they had me add The Amazing Race stuff and had me swap out one picture because it was dated—I was literally holding something that had the date on it.  They also didn’t feel the need to shelter me from certain things. Their perspective on who I should be looking for was different and fresh and that was really helpful.

M: Justin, how was the process for you? Being the chosen one and all…

Justin: It’s funny, my friends actually didn’t want me to go on the date at first, because it was going to be recorded.

M: Right! We didn’t even think about that part of it! What was the date?

Justin: We did a scavenger hunt all around the city.

Scott: This app, Urban Quest Scavenger Hunt, sends you this little quizzes and clues and you end up at various spots throughout the city. It was a pretty fun way to spend our first date. I don’t think the recording interfered too much…

M: So about this swiping for others business, have you ever swiped for other friends?

Justin: Of course! Especially if we’re all out together and someone has their phone out and is swiping in front of me, I’ll totally take their phone and swipe for them. Your friends can totally be more on point than you are when looking for a date.

Scott: Absolutely. I’ve had friends swipe for me before—my married friends totally have swiping envy. And it’s interesting because I’ll ask why they swipe right for someone maybe I would have passed on, and they’re noticing the little things that maybe I would have missed. Like they may see that a potential match is a doctor who has a dog and they may know that those are small things that represent qualities I value, but might not have swiped for because I wasn’t looking for it.

M: So who would you pick to be your Meddlers, if you were to use the app?

Scott: Definitely my mom. I have a few best friends in LA, so I’d probably have a few from there. And a childhood friend from Charlotte. I don’t think I’d pick anyone in Seattle.

Justin: See, I probably wouldn’t choose family to be a Meddler. Their perspective is going to be totally different than a friend. I’d have my oldest friend and roommate, who knows me the best, be a Meddler. Probably another friend from here and another who lives down in Austin. And I’d definitely have a mix of guys and girls.

M: Do you two have any advice for those who are still single out there, using (or are on the fence about using) dating apps?

Scott: I’ve been off and on sites and apps for over 10 years now and I think they’re a great way to meet people you normally wouldn’t meet. Regardless of whether or not you end up dating the folks you meet on there, they’re great “people-meeters.”

Justin: They’re like augmentations to life. Dating apps are just things that help give you a chance to reach out to another person. Just be sure to remember that you can have these amazing conversations online, but you sort of forget there can be all this editing when you’re behind a screen. I’d say get out and meet in person as quickly as possible to see how they are in real life, before you have a chance to build them up too much.

M: Obviously your episode of DTR is the best, but if you had to pick another one to recommend to new listeners, do you have second-best favorite?

Scott: Episode #5, which featured DTR’s producer Julia. The relationship advice in that one is just really, really good.

Our advice? Be like Scott (and Justin). Take the tough love, and run with it. You never know who you might end up meeting.