Dating in Seattle: A Bartender’s Perspective 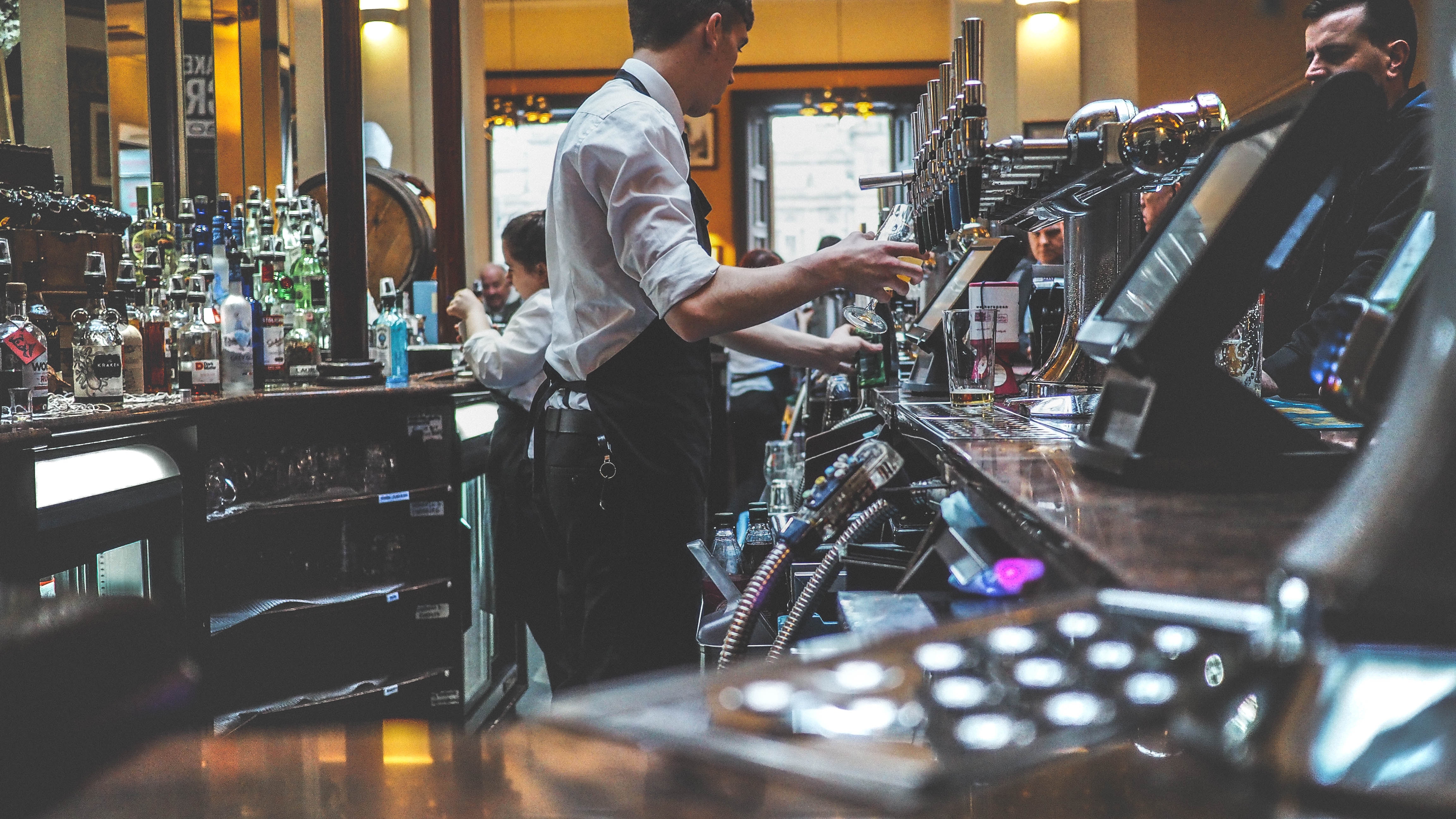 Do you ever sometimes wish you were a fly on the wall watching someone else’s first date—furtively whispering suggestions in the hopes they’ll hear them subconsciously, while quietly observing and rooting for the couple in front of you to succeed (or fail, if it’s painfully obvious how miserable one or both parties are)? Perhaps you might want to give bartending a shot (no pun intended).

A few of our Meddle team members happily frequent the historic Triangle Spirits in Fremont, where we had the good fortune to talk candidly with part-owner and bartender, Kenji Jensen-Otsu, about what he’s seen over the 15 years he’s been behind the bar.

Meddle: Given that you’ve been in the service industry for almost 20 years (and behind the bar for 15) have you seen the dating scene change?

Kenji: So, I went to UW and started at Big Time Brewery right there on the Ave. Obviously, dealing with mostly a college crowd is going to be really different than working at a neighborhood bar catering to an out-of-college crowd, but even taking that into consideration, the scene now is just totally different. With the rise of smartphones, people show up, sit down, and just take out their phones. Before, people would come in, sit at the bar, and actually talk to others—the bartenders, those sitting around them—it was lively and engaging.

You’re also less likely to be hit on at a bar nowadays because of smartphones. Everyone always looks perpetually engaged in something, so it makes it harder for others to approach someone.

Oh, and Wednesdays are now common date nights. It used to be Friday or Thursday nights, but I think now people are picking Wednesdays so they don’t have to potentially “waste” a weekend night on a bad date. If it doesn’t go well on a Wednesday, you still have the rest of the week to look forward to.

M: Smartphones are definitely a blessing and a curse—how do you think they’ve impacted the dating dynamic itself, aside from this notion that everyone’s nose deep in their devices all the time…

K: I think there’s superficiality to it—if you’re using an app or online dating program, you already know so much. You’ve got their profile, you can find their lives on social media, or even find out weird facts with just a basic Google search. Right away you know what they look like, what they do, their favorite movies. Right away you know so much more, which means there’s usually less to talk about and discover during those first few meetings. Small talk is important, that’s how you get comfortable with each other and how you build a rapport. Safe, simple conversations are gone. There is just a lot more pressure to hit the ground running as soon as you sit down.

M: That makes so much sense. Despite being a dating app, we also believe in the value of getting out there and meeting your matches as soon as you can. Texting and emails are great, but there’s something to be said for just meeting in person to see if it’ll work.

But smartphones aside, we have to ask, is the Seattle freeze real?

K: Oh yeah. But I actually think it’s unfair to say that it’s a Seattle freeze because nowadays you’re not going to meet a lot of people who are actually from Seattle. Here’s my take: essentially, everyone is polite and sociable—I’ll be nice to you, chat with you, but maybe I just don’t want to be your friend. Or maybe everyone expects it, so it just becomes this self-fulfilling prophecy. I think it’s a combination of everyone feels new here, feels like the new kid, so the “freeze” somehow it manifests itself in a way that they don’t want to get to know you, but they also don’t want to be rude.

M: Can you ever tell when someone is done with the date and is trying to get going but can’t seem to shake the other person loose? Is there any sort of universal signal or code word someone can tell bartender if they need bailing out?

K: I can usually tell when women are done—most of them will get a phone call and need to leave. Sometimes there’s some ghosting, folks getting up to go to the bathroom and never coming back. I don’t see a lot of honesty. Not a lot of people open up and say, “You know what? This just isn’t going to work, so I’m going to go.”

That being said, one time I was chatting with someone who was meeting a first date and we joked that if she needed help getting out of it, it is was going poorly, that she could flag me down and order a “cantaloupe mojito.” That was our safe word. So if you’re ever at Triangle Spirits and need some help, ask me for one of those and I’ll bail you out.

M: We’re definitely going to have to remember that! Can you think of any memorable dates—good or bad?

K: I can remember this one guy who used to come in to this bar I used to work at a while back who would stack multiple dates in one day. And he did this for years. He’d schedule a date at like 3pm, then another at 6pm, and a third at 9pm. All of us at the bar knew his pattern and it never changed, although it was interesting to watch his taste in women change over time. His approach to dating is not what I would call “good.”

M: Do you any advice for daters from the perspective of someone who’s seen a lot of it?

K: In short, be yourself. A lot of time people who are on a date will ask for my opinion on what to eat or drink or where to go next, and while I’m always happy to offer my own personal recommendations, you should just do what *you* want. Want to order wings? Order wings! It’s like the best litmus test ever. Don’t get hung up on all that dating advice out there about not eating certain things because they’re too messy or send the wrong signal. Let your date know what you like and what you don’t. You shouldn’t do things with the sole intention of impressing your date—it sends the wrong message. For example, if you like whiskey, don’t order the gin and tonic just because your date likes gin and tonics.

I feel like it also goes without saying that you shouldn’t get too drunk. Order what you’re used to and pace your date. Also, don’t take shots when your date goes to the bathroom.

Don’t be a dick to your servers. And always shake hands when you first meet, none of this awkward hug hello stuff. Shake hands first and foremost. If things go well, there is always time for hugs.

M: If you were to use Meddle, who would you have meddle for you?

K: Probably my younger sister—she’s in Seattle. And a guy I play music with. And maybe an ex-girlfriend. I’ve managed to stay friends with a few of them and I know they’d have good insight about who I should or shouldn’t date. And you definitely need this.

M: Who would you want to meddle for?

K: I’ve got a few coworkers and friends who are single that I definitely want to set them up with.  I think you know your coworkers pretty well, especially when you’re in the service industry and I know a few guys that could use a little push. That being said, most of my friends are also bartenders and we don’t really have a hard time meeting people. We’re not shy—you’re not going to make us blush that easily. And truthfully, if you’re a bartender and you can’t get a date, you might be doing something wrong.

M: Do you have a favorite date spot/date night in Seattle:

K: You mean other than Triangle Spirits, right? My girlfriend and I met in the industry (she’s also part owner and bartender at Triangle Spirits) so for our date nights, we usually just get a pizza and sit on the couch.

But that being said, we really like Oliver’s Twist in Greenwood. It’s quiet, dark, nice, and not super fancy. They have amazing cocktails, and great ambience. It’s not pretentious but quirky enough that it looks like you know what you’re doing.

Add-a-Ball in Fremont is a great arcade bar, so there’s stuff to do which can be helpful.

The patio at El Camino is nice. That place in general has a good atmosphere and good food. It’s also loud enough that you’re not going to be able to hear what’s happening down the way, but quiet enough that you can have a good conversation.

Don’t go to Canon on a first date—you’ll look pretentious AF. If you’re going out on Capitol Hill, go to Liberty, or the Hideaway. Hit up Tavern Law. There’s a time and a place for Canon and a first date is not it.

M: Any last words of wisdom for those out there in the dating world?

K: This is a small thing, but in the vein of sticking to what you know, when you order a cocktail, know what liquor you want. For example, “Can I get a Broker’s martini?” And if you don’t know what you prefer, ask your friendly bartender! Not sure what you want in a manhattan, just ask. It can be an easy way to break the ice and potentially learn a little bit more about your date too.

This site uses Akismet to reduce spam. Learn how your comment data is processed.