A Not-Creepy Way to Meet Others 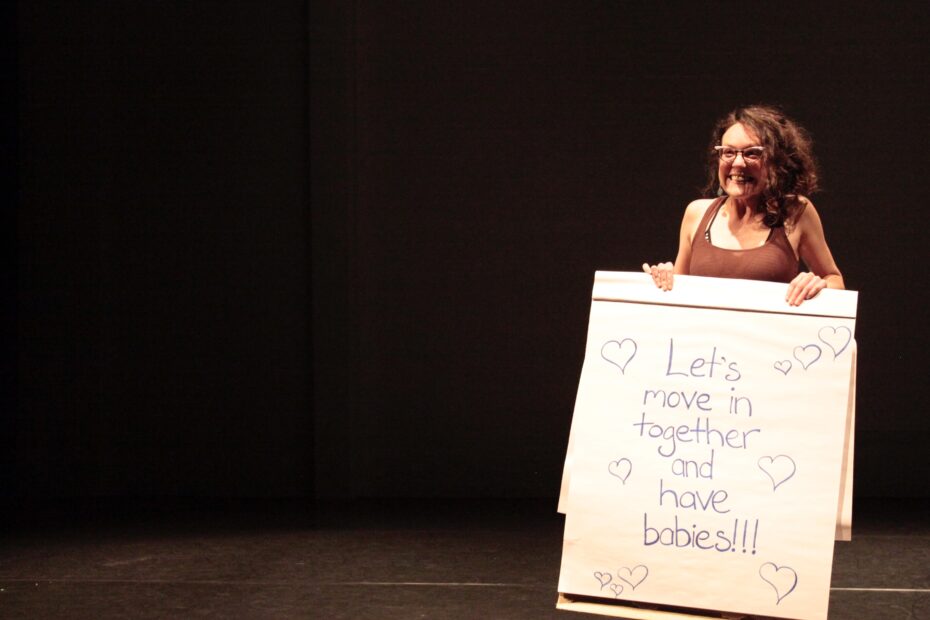 A little while ago, our co-founder Peter had the pleasure of helping out at The Not-Creepy Gathering for People Who Are Single and Want to Fall In Love, a dating mixer-type event that helps to facilitate human connection through some comedy, some activities, and some vulnerability too.

A few weeks later, we had the chance to chat with Jenna Bean Veatch, the creator and host of the Not-Creepy Gathering, and talk with her about why she started these events, what she hopes people get out of them, and how we as a dating app might take a cue from her lessons in human connection.

Meddle: Tell us a little about yourself and the Not-Creepy Gathering:

Jenna: My background is in dance, but as an artist, I do a lot of different things—play music, write, create stop motion animation, I really love to create. I have my Masters in Fine Arts in Interdisciplinary Arts and Creative Inquiry from the California Institute of Integral Studies. In grad school, my work was focused on the desire for human connection, and I was at first doing that through dance. I was making a dance-theater show about that desire, a show that would also attempt to create connection in the moment by having the audience actively participate. But that project wanted to go in a different direction. It was from this desire to actively connect others in the moment that the Not-Creepy Gathering was born.

For me, vulnerability is key in order to make real connections—this is what I as an artist have always wanted to express through my art—this idea of emotional honesty. I’m now far less interested in entertainment for entertainment sake—I want more complexity, more rawness, more depth.

M: What should one expect at these gatherings?

J: Fun! The place one arrives at by the end of the event is a deeper place, but we don’t start there because that’s terrifying! People do tend to arrive nervous, which is normal, so I make a point to ensure that it starts light and fun and funny, to help people loosen up and feel safe and trust the process— to let their guards down a bit. Is it quirky and a bit weird? Yes. But at the same time we’re also acknowledging that we want connection. It’s powerful, especially in the northwest, given the pattern of not understanding exactly what certain things mean—like, what does going to coffee *mean*?

M: This is interesting—this idea that it’s hard in this part of the world to parse meaning. Is this what the Seattle freeze actually is? Or is it just different here?

J: There is definitely more of “what does this mean” here, like there’s this ambiguity around what one person might perceive as a possible romantic interaction versus someone else who sees it as just a friendly meetup. I don’t know if that’s because of a lack of communication or something else, but I also think that passivity is more of a thing here. That could definitely impact meaning—like someone won’t correct someone’s perception because they don’t want to hurt their feelings.

M: So when someone decides to come to one of these gatherings, what do you hope people walk away with afterwards?

J: Vulnerability is the big takeaway—the necessity of allowing ourselves to be vulnerable when the situation calls for it. If we can’t allow ourselves to be our true selves, we’re not going to make true connections.

And I hope that people can just start to move through the world differently; they don’t have to wait for a specific event to practice. Everyday we can just allow ourselves to be a little more open and a little more willing to have a connection. Let’s just learn and get better at valuing people as people, whomever they are, not necessarily filtering them through an “are you the one?” lens.

In short, find something that speaks to you—and then do that with a sense of allowing possibility.

M: Given that we’re a dating app, we’re curious—what’s one thing dating apps could be doing better?

J: Encourage people to take a closer look—to look at something other than just the one picture before you write them off—I think that would be a good start.

I think incorporating better profile questions and offering different way to interact would be useful too. For example, at the Not-Creepy Gatherings, one of the questions we have folks answer is “Tell your partner (at the event) about one of your favorite people.” It allows the teller to naturally “light up” about something in their lives. It helps reveal a connection to someone they love or respect in an easy, fun way.

J: I sort of alluded to it a bit, but most apps are set up in such a way that we’re asked to make snap decisions based solely on physical appearance. I think that just doesn’t make sense. Getting to know people is key. We’re people, we’re multifaceted, we’re not just one picture of how we look. It’s pretty dehumanizing to be reduced to just an image of ourselves and encourage others to make a decision in that single second.

At the Not-Creepy Gatherings, I strongly encourage people to connect with anyone else present and to set aside the notion of dismissing someone because they’re not who you “wanted” to connect/meet up with.

I also think dating apps (and a lot of technology) are replacing human interaction, so we’re getting less human connection than we are actually wired for (no pun intended) and we’re losing those interpersonal skills. I think that’s why a lot of good friendships, roommates, travel partners, etc. are born out of these events vs. romantic relationships—we’re filling the abyss of digital isolation.

M: What’s one thing you enjoy about the dating “scene” today?

J: One advantage of apps and the like is that it does make it easier to get a date. It doesn’t necessarily make it easier to find a relationship per se, but it definitely facilitates your options for simply getting out there and dating.

If people can use that approach as a way to practice meeting and interacting with new people, then it can help us to get that face-to-face interaction that is so important. We learn so much more when sitting with another person *in person* (not to mention what your gut tells you) than an app or screen ever could.

J: I love going for walks outside—it’s an opportunity to really talk with someone and be outside in nature, not get distracted, and to appreciate the things we’re seeing.

I also really love going to bookstores. It can elicit great conversations and topics to chat about. Plus, you can talk together for a bit, then take some time to browse the shelves on your own. Then you can come back together to talk about what you saw, picked up, looked at.

Thank you, Jenna, for taking the time to talk with us! We are excited to see what future Not-Creepy Gatherings may have in store. And for those who are interested in attending one of these amazing events, be sure to visit the site to find out when and where the next Gathering will be. Hope to see you there!